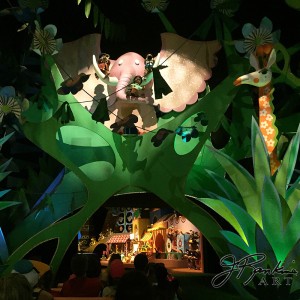 From the surreal to the very surreal. That was the experience on my recent travels to Florida that started at the Dali Museum in St. Petersburg and ended at Disney World in Orlando.

I think Dali and Walt had similar minds.

The Dali Museum is impressive, permanently housing many of the painter’s masterworks. The museum received a major facelift and funding in 2008 and we were lucky that the special exhibit “Two Legends: Side by Side” – the works of Dali and Picasso was held over for a week, catching the second to last day of the show.

Nicely curated, it showed the influence Picasso had on the painter who was 22 years his junior – two larger than life Spanish visionaries whose wives became muse. Many of the works came from private collections, or were on loan from museums around the world.

Only my partner’s four-year old granddaughter could make me set foot in Disney World, but I was glad she did – two full days at The Epcot Center and Magic Kingdom where Mickey and the gang came to oversized life.

No doubt about it, it’s a surreal experience – as one enters another great mad man’s visionary world – a tightly controlled, utopian experiment filled with artistic and creative wonder.

Like the Dali Museum, there was a lot to see and contemplate.

This Disney is very current (the 90 minute line–up to see the life size princesses in Frozen) but maintains enough nostalgia (the 3 minute line to see It’s A Small World) to triggers those childhood memories for people over 50.

It’s A Small World was easily my favorite, not because of my age or its dreaded, repetitive song, but because of the art direction – a 1970’s version of the wholesome 1950’s era done with the aid of killer drugs, no doubt. It was trippy then, and its trippy now, and wisely, they have not tried in all those years to update it. .

And that’s what Dali and Walt and even Picasso really wanted to do – take you on their trip.

What Goes Around Comes Around