You are here: Home / Blog / Boyhood 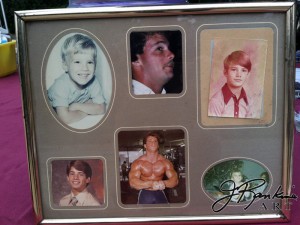 It was found in a box of anonymous donations for a benefit, yard sale fundraiser – a photo-collage depicting a young boys transition into manhood, most likely put together by a loving mother in the late 80’s.

Honestly, it was the bodybuilding photo that first grabbed my attention – a handsome, obviously fit young man in his prime, showing off his hard earned muscles for the camera.

But it was the innocence of boyhood that touched the heart. The opening of presents Christmas day, the perfectly coiffed hair and tied tie for his class photo – maybe recognition of my own youthful virtue and my own late mothers love.

Director Richard Linkletter’s new and much lauded film “Boyhood,” is a coming of age movie like no other. Linkletter shot it over a period of 12 years using the same four main actors. We see actor Eller Coltrane and his character Mason, who was 6 years old when filming started, literally grow up in front of our eyes. It’s a simple film that brilliantly chronicles the complexities of life in all its awkward, adolescent glory. No melodrama – just the everyday, ordinary things that happen in life that shape who we become.

Both photo collage and film strike a cord, and more than just a recollection of one’s own life’s journey. They’re’ reminders of how fleeting it all is, or was – our youth, and how those memories can easily end up in a box for sale for only a buck.

I reached for my phone to snap a picture, then set the collage back down on the table with the other used, no longer needed items for sale, a slight melancholy coming over me – the same feeling I had walking out of the movie theatre.

After a frenzy of yard sale activity, there finally came a break. The collage was gone, and nobody working the tables could recollect who had bought it.

Who would purchase such an item? I was just as curious as to who would buy it as to who was in the photo, and how and why it ended up on a yard sale table.

The movie ends with Mason, now 18, on his first day of college, hanging with a girl he just met, sitting, watching a dramatic sunset – his whole life ahead of him.

I wonder about my non-fictional Charles Atlas and how his life turned out – his hope, goals and dreams. It’s unlikely I’ll ever find out.