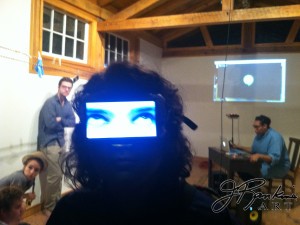 Admittedly, I was late for Sondra Perry’s multi-media, interactive, conceptual performance piece at the Bottle Rocket gallery in Fayettville Saturday night. The visual of a black woman stirring up a big batch of pink, gooey, bubblegum in a large metal can and feeding it to herself and the audience, was to say the least, intriguing. I politely declined the offering, probably due to my generational concern of sharing bodily fluids and needles.

Somewhere in the interactive mix was dialogue pertaining to the movie “The Help” and whether it was an accurate portrayal of African American’s in the pre-civil rights era in the south. The visuals were very strong – the live digital feed and audience response – not so much.

Trying to find out a bit more info on the artist, I Googled Sondra Perry/ bubblegum and ironically came up with hundreds of photos of pop star Katy Perry.

Big kudos to Bottle Rocket for bringing in thought provoking work  to our little corner of the world.