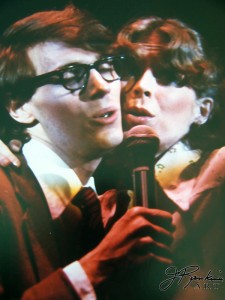 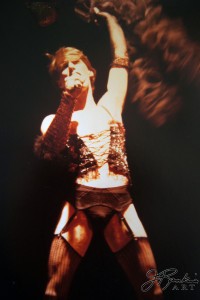 It was 1979 and I got my first big acting break playing Brad Majors in the Toronto production of the Rocky Horror Show. It was an open audition, a “cattle call,” where every actor in the city tried out. Frankly, I’m not sure how I got the part. The show was put on in an old 1200 seat theatre and led by a very talented cast, forcing me to up my anti. There are a few songs in the stage production not in the movie version, and one of them is a ballad Brad sings lamenting his betrayal of Janet with Dr. Frankenfurter. I still remember the terror and shouts of “asshole”  from the audience before having to sing a solo so few in the theatre were familiar with.

Pictured with me is actor Jessie Thompson who played Janet. She was an itty-bitty thing with a big booming voice, who literally held my hand throughout the run.

It was crazy fun –  I was young, doing what I loved to do, getting paid, and having a secret affair with my leading man while on tour. It was my “Don’t dream it – Be it” moment more than 35 years ago. Photo credit – Marni Grossman.

At peace with the snake