You are here: Home / Art Attack! / Will it play in Peoria – this week’s Independent column 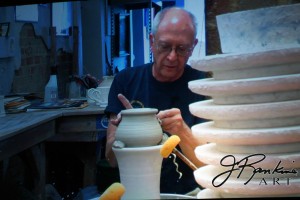 It felt like a post-coital love fest exiting the AUD after the premier of the film Eureka Springs – the Art of Being Saturday night.

The full crowd (400 plus people?) gave the film and director Kai Robert a well deserved standing ovation followed by hugs, kisses and congratulatory pats on the back.

It’s hard to be subjective when the subjects are the artists, the town I call home and the people I love.

The documentary features and follows 13 local artists the director wisely chose to just let speak, in a simple and straightforward approach. And all come across as eloquent, intelligent and, surprisingly, very funny.

One of the first voices and faces you see is that of the late Gary Eagan speaking with partner Steve Beacham in their Spring St. Pottery studio. Gary was a dear friend and one of the first people I met in Eureka Springs more than 18 years ago, and seeing him larger-than-life triggered an emotional response.

Artist matriarch Mary Springer expressed well her knowledge of our town’s art history. Valerie Damon has an amazing face with or without paint, and was perfect for the big screen. Denise Ryan’s recollection of her mother and well-known artist, Elizabeth Ryan, was touching. Calligrapher Charles Pearce added some dry British wit, and it was nice to see the extremely talented James Yale included. But it was Julie Kahn Valentine’s honesty and $&@% YOU attitude that won our hearts and stole the show.

As much as I enjoyed this well-done, professional film, it was the glaring omissions that almost overshadowed. By narrowly focusing on only 13 from our vast well of talent, some obvious artists were distractingly absent from the movie.

In documenting the history of Eureka Springs’ art and artists, there was no mention of the late, great Mary Sims or Glenn Gant, or the very much alive Crescent Dragonwagon.  I could not have been the only one wondering when Zeek Taylor and Susan Morrison were coming on – two artists essential in telling this important Eureka story.

Am I too close? Maybe. I think this film could speak to a broader audience and not just be a home movie seen and appreciated only by those involved. I hope it will be screened at this year’s Hot Springs Documentary Film Festival – would love to witness crowd reaction.

The film, while not perfect, does capture the spirit of Eureka Springs and the artists who call it home. Congratulations, Kai.

My column in this week’s Independent