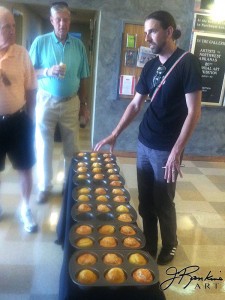 Last night’s Sensory Iconoclasts event, pairing artist and chef that started at the Arts Center of the Ozarks and continued on the Arkansas /Missouri train route was a bit of an unorganized mess. But a real fun mess it was.

For the second year in a row organizers asked NWA artists to collaborate with regional chefs to create a visual and culinary piece on the theme of “sustainability in art and culture.”

Unfortunately, it was unclear arriving at the ACO whose work was who’s, (a simple nametag would have helped), and how artist and chef collaborated.

Artist Kat Wilson’s beautiful large abstract photo made more sense when one new it was made up of layered aerial shots of the Buffalo’s controversial hog farm. Paired with Arsaga’s at the Depot’s Emily Lawson, Emily created a molecule fused Vodka cocktail that cleverly commented on our beloved and soon to be endangered river.

Dayton Castleman cast plaster and hand painted replicas of Hive chef, Matt Mclure’s organic corn muffins. Both plaster and real muffins were interspersed together in muffin tins and aligned in two rows abet each other on a long table near the entry of ACO.

Dayton was on hand to explain the interactive work and to encourage the public to search, discover and eat the real deals. When all the muffins were consumed, the remaining plaster ones, still in their tins, spelled out the word muffin in braille.

Deadly cocktails on a moving train made for some interesting moments, including a near tragic balsamic vinegar mishap.

There were a total of eight train cars, each with a different artist and chef featured. Moving from car to car while the train was in motion was strictly forbidden, albeit dependent on who was on security, and whom you were behind when they let that person pass through.

Things got very intimate as people squeezed through narrow passageways to get by – at times feeling like a Marina Abramovic performance piece, except with clothes on.

Spontaneity and a go-with-the-flow attitude was needed in order to have fun on this train ride, and it was pretty clear who was having fun, and who was not.

Carrying out the bodies