You are here: Home / Blog / Lost or Stolen – Post Dali 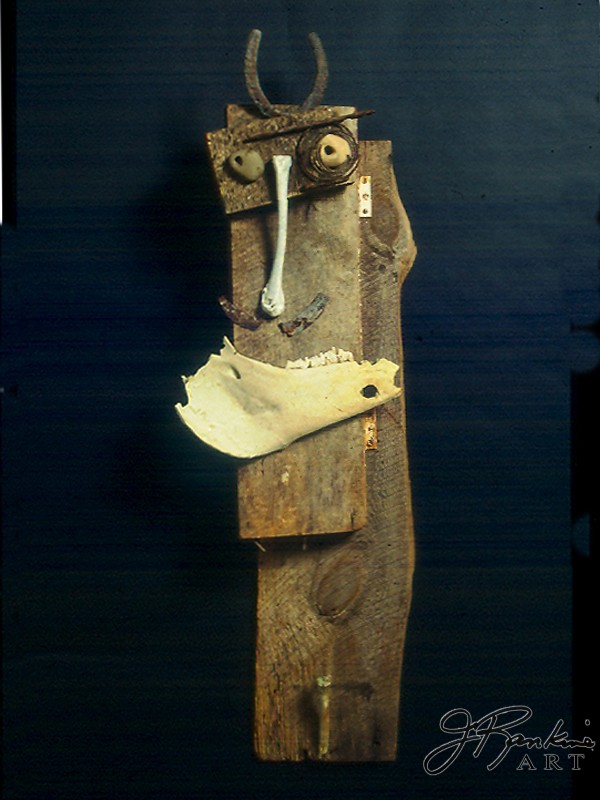 I will probably never know if my artwork went accidently missing or was stolen from the Arkansas Convention Center in Little Rock.

The State Convention Center had just finished an extensive expansion in 1999 and put the word out to all Arkansas artists to submit work for a 6-month juried exhibition in the newly finished center.

I was still a relative newbie to Arkansas and was thrilled my found object assemblage piece, “Post Dali” was chosen.

Made of found wood, metal, stone, shell and bone, Post Dali was part of “The Smile Series” – an 12-piece installation, all of which incorporated the common element of an animal’s jawbone.

This was my first series of work completed since my move to Eureka Springs from Key West, and all the materials were found on my newly acquired land just outside the city.

Accompanied by good friend Cindy Rogers, whose work was also accepted, we headed to Little Rock for the grand opening reception.

The exhibition received statewide and national press and I was surprised the next day to find a large picture of Post Dali along with a lengthy story on the Convention Center exhibition in the Arts and Leisure section of the Arkansas Democrat Gazette.

Six months later I received a letter asking if I would be interested in extending my participation in the show for another year with the same condition that the artist would receive 85 percent if the art sold.

I agreed, and a year later received another letter asking if I would be interested in keeping Post Dali on view for yet another year.

Again I agreed, and after another year passed I inquired about taking the work back.

After several unanswered phone calls inquiring how I go about picking up the work, I finally received a letter three months later, stating they had unfortunately “misplaced or lost “ Post Dali.

I was obviously upset, but comforted with a $1,400 check for the “lost or misplaced” artwork.

In hindsight I wish I had made a bigger scene and demanded to know what happened to the art, even going to the press – but alas.

Did someone just walk in, snatch it off the wall, and walk out of the building? Did it accidently fall to the ground, smashing it beyond repair while being moved?

I probably will never know, but still have this fantasy of walking into a strangers home and finding Post Dali hanging on a wall staring at me with his larger than life/death grin.