You are here: Home / Blog / Which came first – the flower or the vase? 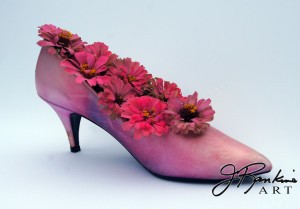 While scouting the garden for inspiration for another POSY photograph, I came across some neglected pink Zinnias that were well past their peak and that should have been deadheaded to make room for new growth. I thought the flowers were a little too faded and tattered to make for a pretty Posy picture until I entered my neighbor’s house and discovered a pair of pink satin high heels  hanging on his wall in the same faded condition as the Zinnias. I had found the vase. Sometimes the vase will dictate the photo, other times, it’s the flower that calls the “shot.” And then there are those rare times when both just seem to come together. The title of the new photograph is “Domi’s Heel” and it’s hanging along with 23 other POSY’s at the Norberta Philbrook Gallery on N. Main.

One Daylily at a Time

A bouquet of thanks