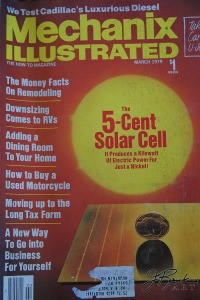 TBT… I came across this 1979 Mechanix Illustrated and was struck by its cover –  solar energy in the very near future for 5 cents a kilowatt. Imagine if we as a nation had actually invested in this technology 35 years ago.

Instead the American people elected Ronald Reagan into office the following year and the first thing on the new presidents agenda was to slash all of former president Jimmy Carter’s alternative energy programs. Saint Ronnie even went as far as removing the solar panels on top of the White House – more than just a symbolic gesture to his oil-producing buddies.

And here we are again, more than three decades later.

The climate change denying Republicans who now control the House and Senate are determined to get this environmentally disastrous Alaskan oil pipeline through and continue its support for dirty coal and fracking. They can only criticize Obama’s historical energy negotiations with China while our planet continues to melt down.

I just don’t fucking get it America.

The Art of Sharing