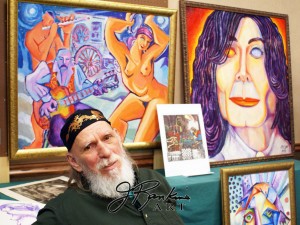 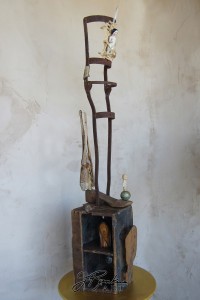 We recently lost Jack Miller, a working artist and Katrina refugee, who with his wife, Sabina, made Eureka Springs home after the storm. Jack was the real deal – an artist who spent hours in the studio, daily. A painter and printmaker, Jack was also responsible for the giant red high-heel, the jaguar-pulling chariot, and waterwheel floats created for the Krewe of Krazo parades.

About 18 months ago when visiting Jack in his Artist Colony studio, he caught me eying a beautiful old shoeshine box; primitive, patched and beautifully patina-ed from wear and age. I had recently finished a series of found object assemblages using shoeshine boxes as the base and this one was screaming out to me. He had brought it with him from New Orleans, and no, it was not for sale.

A few months later Jack and Sabina walked into my antique store with said box in hand saying, “we think you need this.” I was deeply touched by the gesture, took the box home, and placed it in the hallway leading to my studio. There it sat for several months until I literally tripped over it while thinking about a new assemblage for the Artist Impression of the Mother show. I had found my base and finished the piece I called “Inching Forward” the same day I heard of Jack’s passing. The old shoeshine box and Jack’s spirit lives on.

So what better way to end the May Festival of the Arts than paying homage to the man and artist? Jack loved a good party (he was from NOLA) and Sabina, friends and family are planning a celebration/retrospective of his life and art at The Space, Saturday May 31, from 5 to 8 p.m.

All who knew Jack or admired his art are invited to come out and celebrate.

Fave pic from the Mother Show

Carrying out the bodies