You are here: Home / Blog / The Giant Ichneumon Wasp 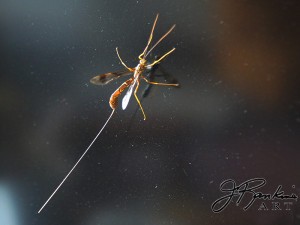 I Googled “giant wasp with big ass stinger” after this creature landed on my television screen. Up popped the Giant Icheumon wasp, whose 5- inch stinger is actually an ovipositor for laying eggs. “Completely harmless” – which gave me the courage to escort her safely outside. According to Wikipedia – Megarhyssa macrurus is considered harmless to humans;[1][5] they are parasitoids on the larvae of the pigeon horntail (Tremex columba), which bore tunnels in decaying wood. Female Megarhyssa macrurus are able to detect these larvae through the bark, and lay their eggs on them; within a couple of weeks, the Megarhyssa larvae will have consumed their host and pupate. They will emerge as an adult the coming summer.[1][4]